While Musk’s unpredictable flip-flop on the issue of buying Twitter still remains incomprehensible to some, and continues to raise questions, there’s one thing everyone who speaks on Twitter seems to agree on: it doesn’t matter. who owns it, Twitter is one of the world’s most important social networks, the digital public square where issues vital to the future of humanity are debated, as Elon Musk said last April.

Elon Musk has finally decided to honor the agreement he signed in April 2022 despite the dispute with Twitter which has already lasted for several months. Elon Musk offered to the social network to complete the takeover under the terms initially agreed, that is to say 54.20 dollars per share, which represents approximately 44 billion dollars in all. A decision that surprised more than one given that Elon Musk is preparing his trial against the social network by pointing out, among other things, the percentage of bots that would be higher than the 5% advanced by Twitter.

Yes, Twitter can be informative, entertaining and enraged. For a subset of its users, Twitter is fascinating, addictive, and periodically useful. It is different, however, from being vital. And, worryingly for Musk or anyone who owns Twitter for the foreseeable future, there’s a real chance that Twitter’s importance, whatever it may be, is in permanent decline.

According to Pew reseach, an American research center that provides statistics and social information in the form of demographics, opinion polls, content analysis indicates that, only 23% of American teenagers say they use Twitter today, compared to 33% in 2014. Perhaps that’s why Elon Musk floated the idea of ​​turning Twitter into something else. Buying Twitter is an accelerator to build X, the all-in-one app, Musk tweeted. 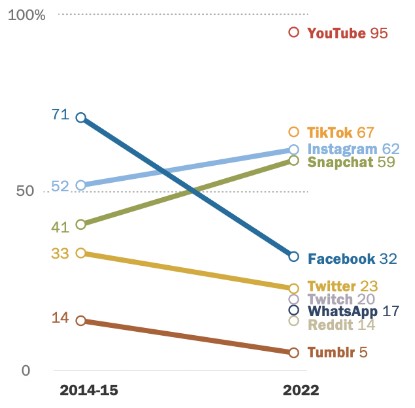 Musk talked about an application called “X”, an idea he elaborates on in these terms: the everything app. According to the billionaire’s past comments, this service could resemble the Chinese application WeChat. He didn’t provide much detail beyond a one-sentence tweet, but he is an avid WeChat fan.

These are applications that allow users to access a whole series of services ranging from communications to calling a VTC. WeChat is sometimes described as Facebook, Twitter, Snapchat and PayPal all rolled into one. “I think if we can achieve that, or even come close to it at Twitter, that would be a huge success,” Must said.

When it was released in 2011, WeChat was just a simple text and voice messaging mobile app. However, it quickly evolved into an application allowing the Chinese to do almost everything online, a kind of mini-Internet used daily by more than a billion people. Musk said out loud to make Twitter more useful, saying he wanted it to be more like WeChat and TikTok, ByteDance’s video-sharing service that took off in the United States. The billionaire also drew a parallel with other popular apps in parts of Asia.

Realistically, most people don’t spend time on Twitter. Even taking into account users of all ages, Twitter is not at all as popular as other social networks. Sure, its 238 million monthly users are clipped by the obvious suspects of Facebook, Instagram and WhatsApp, but it’s also much smaller than Snapchat, which has 347 million daily users, and WeChat, the Chinese app that boasts of having 1.2 billion active users.

Twitter remains firmly text-based at a time when much of the world is embracing images and video. Perhaps the best realistic argument for Twitter’s importance comes from writer Ryan Broderick, who calls it the primary website through which all culture in the United States passes.

Broderick argues that Twitter is simply the top layer of social media, mainly because it’s quite easy to search, especially compared to TikTok. It’s a guide to the rest of the Internet, not a meeting place. But it’s easy to see why some Twitter users — especially those working in politics — value Twitter so highly. And much of that value was reinforced during Donald Trump’s campaign and presidency.

But looking back, one can also understand why these use cases aren’t really scalable. Protesters can still use Twitter to organize, but repressive regimes can also demand that Twitter take down messages, or they can restrict it or shut it down altogether, or even throw Twitter users in jail.

Betting that anyone – including Elon Musk – can turn around a failing digital consumer business is a very risky proposition, not least because it’s never been done before. Once Internet users decide to move on, they never come back. See: Myspace, AOL, Yahoo. See also: Mark Zuckerberg’s plan to start a new metaverse company to replace his aging Facebook company.

What is your opinion on the subject?

Can Elon Musk save Twitter from collapse? Or is he just going to throw away $44 billion?

Elon Musk reportedly intends to destroy Twitter and turn it into WeChat, the Chinese chat, an application allowing everything from messaging to electronic payments